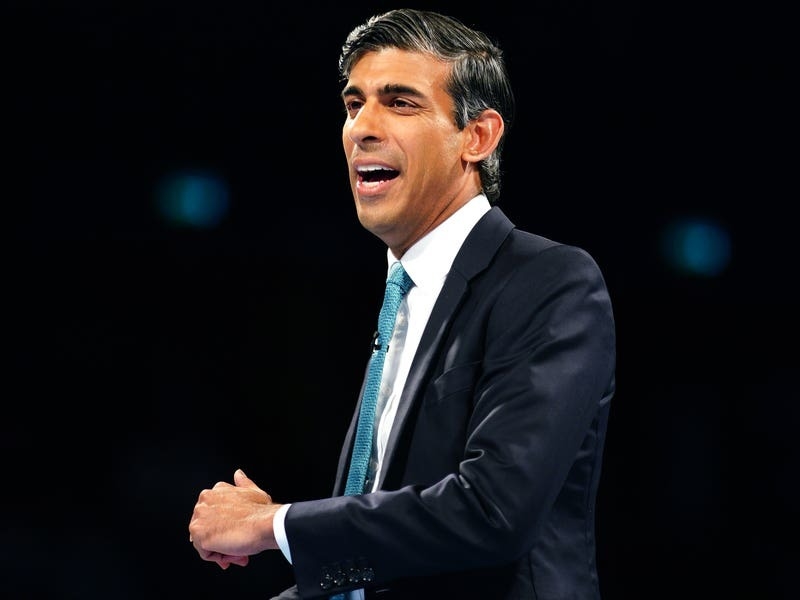 Rishi Sunak has ramped up his promises to tackle the cost-of-living crisis as he seeks to gain ground on his rival in the Tory leadership contest.

The former chancellor has said he is prepared to find up to £10 billion of extra support for those facing rising bills in the autumn – with a vision to cover the total cost for up to 16 million vulnerable people, according to The Times.

It said he valued his cut to VAT on energy at £5 billion, and would find the same amount again to go towards helping the most in need, as he warned: “You can’t heat your home with hope.”

Writing for the newspaper, Mr Sunak said: “People need reassurance now about what we will do and I make no apology for concentrating on what matters most.”

As the pair took to the stage for the latest party hustings in Cheltenham, the former chancellor said that without further direct payments, pensioners and those on very low incomes could face serious hardship.

But Liz Truss stood by her tax-cutting plans, warning against “Gordon Brown economics”, as she said “you take money off people in taxes and give it back in benefits”.

Asked at the hustings whether she was for or against “handouts”, Ms Truss stressed that her “first preference” has always been to “reduce taxes”.

She has previously hinted she would consider further support for struggling households if made prime minister, but insisted she will not “write the Budget in advance”.

With a dire new warning that energy bills could top £5,000 by the spring, the cost-of-living issue continues to dominate the exchanges in the battle to succeed Boris Johnson.

Universal credit, winter fuel payments and similar schemes could be used to ease the burden.

Mr Sunak also refused to rule out “some limited and temporary one-off borrowing as a last resort to get us through this winter”.

While Ms Truss stressed she was keen to cut taxes, Mr Sunak warned at Thursday’s hustings the country “will never ever forgive us” if the Conservatives do not provide “direct support” to millions of pensioners.

“No tax cut, and Liz’s tax plan, is not going to help those groups of people,” he said.

“So scrapping the health and social care levy, as she wants to do, is worth £1,700 to her on her salary.

“For someone working really hard on the national living wage, it’s worth just over a quid a week. And for someone who’s a pensioner, without any earnings, it’s worth zero.

He said it would be a “moral failure” not to do this, suggesting Ms Truss’s vision could put people at risk of serious hardship.

“If you support a plan that Liz is suggesting, which says she doesn’t believe in doing that, doesn’t believe in providing direct financial support to those groups of people… we are going to, as a Conservative Government, leave millions of incredibly vulnerable people at the risk of real destitution,” he said.

Quizzed on the billions of profit made by energy giants, Ms Truss said she would ensure companies in an oligopoly were held to account.

But she insisted that profit is not a “dirty word”, and argued that it being treated as such is “a massive problem”.

She also said she would “absolutely” not support a windfall tax, claiming it is a “Labour idea”.

“It’s all about bashing business, and it sends the wrong message to international investors and to the public,” she said.

“Don’t get me wrong, I’m a massive fan of Mrs Thatcher, but we live in different times,” she said.

Earlier on Thursday, Mr Johnson appealed to electricity bosses to help ease the pressure as on hard-pressed families.

Representatives of major electricity companies arrived in Downing Street for crisis talks as analyst, Auxilione, said regulator Ofgem could be forced to raise the price cap for the average household to £5,038 from next April.

However the meeting failed to produce any immediate concrete help for struggling consumers, with Mr Johnson acknowledging any “significant fiscal decisions” would be be a matter for his successor.

Instead the Prime Minister was reduced to urging the companies to act “in the national interest” in the wake of Russia’s invasion of Ukraine which has caused the price of oil and gas to soar.