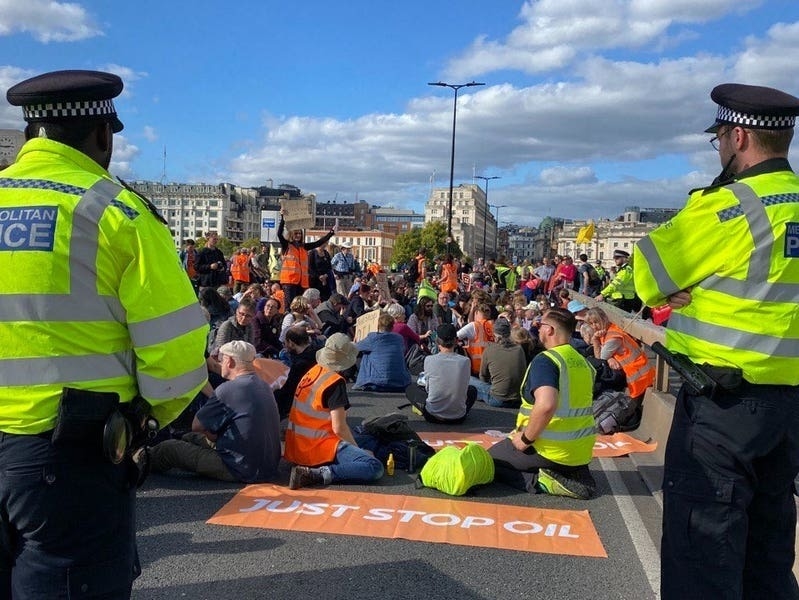 Activists have taken part in a second day of protests to demand the Government end the cost-of-living and climate crisis by stopping new oil and gas.

The Just Stop Oil (JSO) group said that 250 of its supporters held marches through central London on Sunday where they disrupted traffic in shopping districts and tourist hubs before carrying out a sit-down protest on Waterloo Bridge.

A JSO spokesman said: “We will continue in civil resistance until this government takes immediate steps to meet our demand to end the cost-of-living and climate crisis by stopping new oil and gas.

“We need to start a rapid transformation to a fairer society, decided by ordinary people and paid for by those who are profiting from humanity’s destruction.”

Parts of the city including Oxford Street, Ludgate Hill and Southampton Row were disrupted, before the groups met at Covent Garden and then went on to block Waterloo Bridge by sitting in the road.

The protest comes a day after thousands of activists gathered across the country to demonstrate against soaring energy prices and the climate crisis.

The demonstrations took place in cities including London, Glasgow and Belfast. They also coincided with postal and rail strikes, along with a rise in average electricity bills of almost £600.

A demonstrator at Sunday’s protest, who gave her name as Louise, said: “If you’re angry about the cost-of-living crisis, the energy crisis, the climate crisis, these are all part of one crisis.”

The Metropolitan Police said a total of 31 people were arrested in central London, including 29 who were arrested on suspicion of obstructing a highway after a protest on Waterloo Bridge.

A police spokesman said: “The protest has now finished. We thank the public for their patience.”