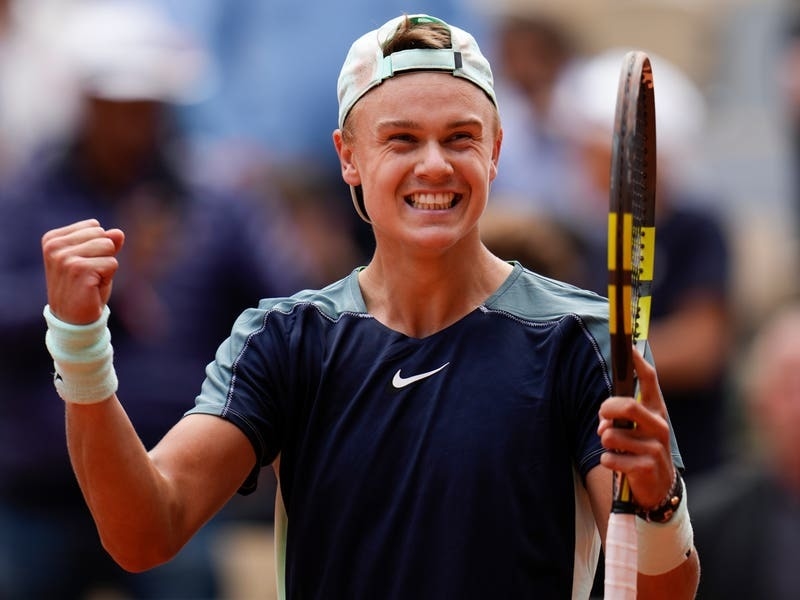 The so-called ‘next generation’ of men’s tennis is in danger of being usurped by an even newer breed at this year’s French Open after Stefanos Tsitsipas was sent packing by Danish teenager Holger Rune.

There was a further surprise in the night match when second seed Daniil Medvedev crashed to a heavy defeat against Croatian veteran Marin Cilic.

Greek fourth seed Tsitsipas, runner-up 12 months ago, is one of a handful of players still waiting to step in when the powers or physical health of Novak Djokovic, Rafael Nadal and, notionally, Roger Federer, finally begin to wane.

Rune joins fellow 19-year-old Carlos Alcaraz in the quarter-finals, the first time two teenage men have reached that stage of a grand slam since the 1994 French Open.

Spain’s Alcaraz could land another blow for the even younger guns on Tuesday when he takes on 25-year-old third seed Alexander Zverev, another of the next cabs off the rank but who, like Tsitsipas, is still hunting a maiden grand slam title.

Rune, who had not won a match at a major before arriving in Paris, had to save three break points in a nerve-wracking final game before getting over the line when Tsitsipas went fractionally long.

He said: “I was very nervous but at the same time I knew that if I go away from my tactics I will lose for sure.

“I tried to play my plan and it worked out so well at the end. It’s just so great to still be here.

“It was part of the tactic to be as aggressive as possible. Tsitsipas attacks every ball. I had to be aggressive, play fast, and I really like playing the drop shots. It worked out and I’m really happy.”

Tsitsipas said: “These kids are going to want to beat me badly because obviously they are chasing.

“I’m chasing too, but I’m at a different kind of position than they are. I’m hungry to beat them too. Now that they have beaten me I want payback.”

Medvedev does have a grand slam title to his name having won the US Open last year.

But he has never been a big fan of the clay and, with Russian players banned from Wimbledon, he will have to wait until Flushing Meadows for his next chance after a 6-2 6-3 6-2 defeat.

“It was one of the best matches of my career from start to finish, A fantastic match from the first point to the last,” said 2014 US Open champ Cilic.

Next the 33-year-old will face another Russian, seventh seed Andriy Rublev, who was level at one set apiece and 2-0 up in the third against Jannik Sinner when the Italian retired through injury.