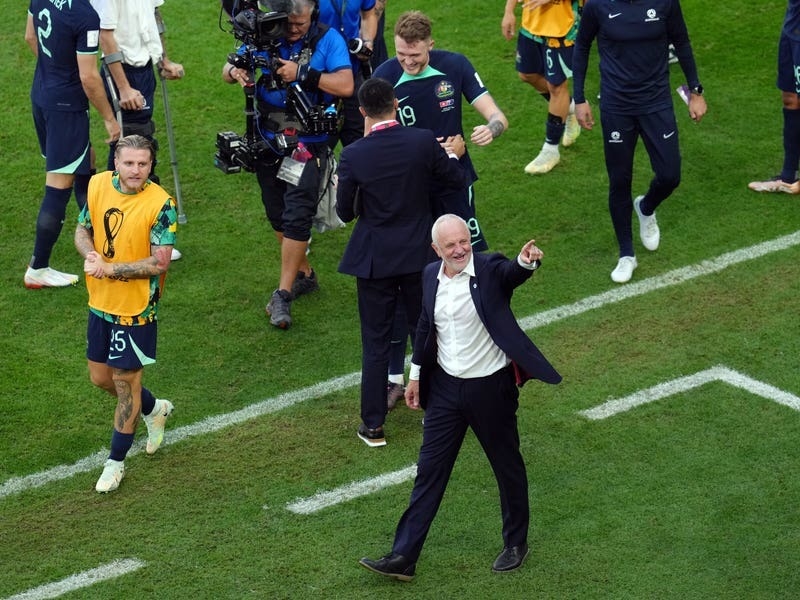 Jubilant Australia boss Graham Arnold hailed the “Aussie spirit” of his side after the 1-0 win over Tunisia ignited their World Cup.

Mitchell Duke’s superb header gave the Socceroos, beaten 4-1 by France in the Group D opener, a first win at a finals in 12 years and set up what is likely to be a straight shoot-out with Denmark next week for a place in the last 16.

“Our fight and our grit and our determination, the old Aussie way, was very important tonight.

“We said to the boys ‘let’s put a smile on the nation’s face’. I can imagine the celebrations at home. I think there’ll be a few hangovers in the morning. But I won’t have one.”

Australia were facing a Tunisia side who had kept a clean sheet in nine of their previous 10 matches.

But that stingy defence was breached in the 23rd minute when Australia played the ball out long from the back.

The ball was smuggled out to Craig Goodwin down the left wing, and although his cross took a deflection Duke was able to readjust and conjure up a superb glancing, looping header over Tunisia keeper Aymen Dahmen.

Duke celebrated by making the letter ‘J’ with his fingers, a gesture reciprocated by his beaming son Jaxson in the stands.

Hibernian winger Martin Boyle was on crutches at the centre of an emotional Australian huddle after the final whistle.

The 29-year-old has stayed on in Qatar despite having to withdraw from the squad hours before the tournament started due to a knee injury.

“He’s part of the staff now, the ‘OVM’; official vibe manager, to keep all the boys up,” revealed Arnold.

Tunisia face a huge task to prolong their World Cup with one point to their name and a final group match against holders France on Wednesday.

Head coach Jalel Kadri said: “It was, as expected, a very tough match with two very hungry, strong teams who wanted three points. It was crucial for both teams to win.

“We still have one match to go and we will play our hearts out. I hope we will be lucky next time.”