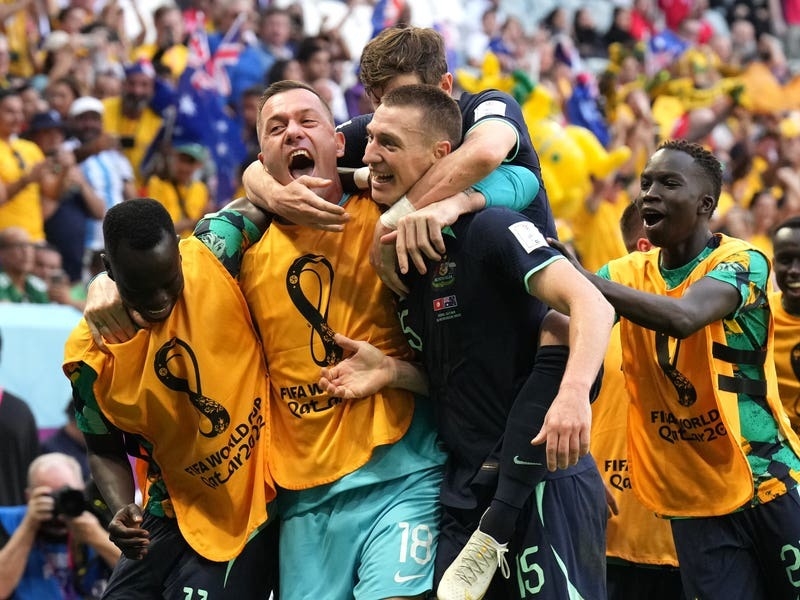 Australia ignited their World Cup as a stunning header from Mitchell Duke secured a 1-0 win over Tunisia.

The Socceroos had been thumped 4-1 by France in their Group D opener and knew another defeat would almost certainly send them packing.

But Duke’s first-half goal set up what looks set to be a straight shoot-out with Denmark next week for a place in the last 16.

They were also facing a remarkably stingy Tunisia defence who, apart from a 5-1 defeat by Brazil in September, had kept nine clean sheets in their previous 10 games including Tuesday’s goalless draw with the highly-fancied Danes.

But that defence was breached in the 23rd minute when Australia played the ball out long from the back.

It was smuggled out to Craig Goodwin down the left wing and although his cross took a deflection, Duke was able to readjust and conjure up a superb glancing, looping header over Tunisia keeper Aymen Dahmen.

It was a goal reminiscent of Aussie great Tim Cahill and the towering World Cup headers he scored against Serbia, in 2010, and Chile four years later.

Tunisia should have gone into the break level when, in five minutes of time added on at the end of the first half, Issam Jebali drove a dangerous low cross into the Australian area, but captain Youssef Msakni’s near-post finish flew wide.

Australia keeper Mat Ryan finally had a save to make when he pushed Msakni’s drive wide before, at the other end, the sliding Mathew Leckie just failed to get a stud to Jamie Maclaren’s ball into the box.

His chance arrived with three minutes left but he fired Wajdi Kechrida’s cut-back straight at Ryan.

While Australia celebrated a crucial win, Tunisia’s prospects look slim with one point to their name and a final group-stage match against holders France on Wednesday.